March Madness has arrived and it is always one of my favorite times of the year. I grew up in the early days of ESPN when they broadcasted the tournament and during the 1980’s TV really helped make the tournament the spectacle it has become. I got interested long ago.

I love brackets and started running my first pool for the tourney in second grade. Growing up where I did college basketball is a big deal with Kentucky, Louisville, Cincinnati, Xavier, Ohio State, Northern Kentucky, Dayton, Butler and others all within a two-hour drive.

Many things have helped to draw me in; but nothing makes the men’s college basketball tournament more than special than the upset and the surprise teams that make deep runs. Here is my list of the biggest Cinderella stories of all-time (listed chronologically):

1983 NC State
We have all seen it now – Jim Valvano running across the court and his No. 6 seeded Wolpack stunned Houston’s infamous “Phi Slama Jama” powerhouse to win the title. N.C. State only entered the tournament with 20 wins and survived double overtime in Round one and a pair of two-point contests before even getting to the title game.

1985 Villanova
The Wildcats to this day are the lowest seed ever to cut down the nets, as Rollie Massimino’s squad was an 8-seed with 19 wins entering the tournament that took the country by storm. Their magical run to a title came to its climax as they downed Patrick Ewing’s Georgetown Hoyas at Rupp Arena, 66-64.

1986 LSU
This is still the only 11 seed in history to knock off a 1, 2, and 3 seed (Memphis State, Georgia Tech and Kentucky) in a single tournament as the Tigers made an improbable run to the Final Four where they fell to the eventual National Champions, Louisville. 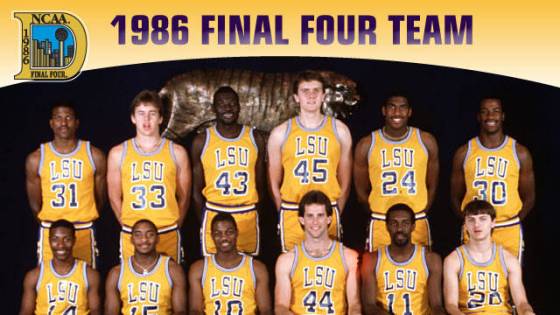 1988 Kansas
Including the ’88 Jayhawks on the list of Cinderella teams might lead to some controversy, but seeing a No. 6 seed win it all was enough for me. Danny Manning was a monster during this run, including his 31 points and 18 rebounds in the Championship game win over Oklahoma.

March 27, 1988 – In the regional championship game in Pontiac, Michigan, KU beats Kansas State 71-58 and advances to the 1988 Final Four to be held in Kemper Arena in Kansas City. pic.twitter.com/lTSsjEZEIc

1990 Loyola Marymount
This will always be one of my favorite underdog teams. After seeing their teammate Hank Gathers collapse and die, the Lions went on a magical run to the Elite Eight without their best player. That team averaged an astounding 122.4 points per game. I’ll never forget them all wearing No. 44 in Gathers’ honor and Bo Kimble shooting free throws left handed to pay tribute to his fallen friend.

2006 George Mason
After failing to win the CAA tournament, the Patriots squeaked in as an 11 seed with an at-large bid. They knocked off some long-time powers in Michigan State, North Carolina and Connecticut. The overtime win over the Huskies to get them to the Final Four was an instant classic.

2008 Davidson
Stephen Curry led the 10th-seeded Wildcats to the Elite Eight with victories over Gonzaga, Georgetown and Wisconsin along the way before getting knocked off by the eventual champs, Kansas.

2011 VCU
The Rams had to win a play-in game just to get into the Round of 64 and wound up in the Final Four as an 11 seed. They took down USC, Georgetown, Purdue, Florida, State and Kansas along the way.

2013 Florida Gulf Coast
The Eagles are the only team on this list that didn’t make it pass the Sweet 16, but they’re also the only No. 15 seed to play a Sweet 16 contest. Dunk City knocked Georgetown and San Diego State before falling to Florida.

2018 Loyola Chicago
Sister Jean may be remembered the most about this team years from now, but the run the Ramblers went on was special even without that one-of-kind nun cheering them on. They started their tournament off with a thrilling game-winning shot by Donte Ingram to beat Miami and then took down Tennessee, Nevada and Kansas State before losing to Michigan.

“This is the most fun I’ve had in my life.”—Sister Jean in front of a packed room at her NCAA Tournament press conference. ? #OnwardLU ?? #MarchMadness #FinalFour pic.twitter.com/FdMuONRygm