Championship weekend has arrived! For those that made it congrats, but there is still some work to do. Before making those final decisions be sure to check out our Studs, Duds and Sleepers for Week 16 of the 2017 season.

QUARTERBACKS
Stud: Russell Wilson – Wilson was underwhelming last week, but he should bounce back against Dallas. The Cowboys are allowing the 12th most fantasy points to quarterbacks this season. Don’t get cute with your season on the line. Trust Wilson to bounce back and perform at a high level.

Dud: Jimmy Garoppolo – Garoppolo topped 300+ passing yards in first two starts. He’ll be underwhelming this week against the Jaguars’ defense. They’ve given up the fewest points to quarterbacks this season. Garoppolo is a low-end QB2 that I’m avoiding in all formats.

Sleeper: Joe Flacco – Flacco has throw for 269 yards or more in each of his last three games. He’s a sneaky sleeper going up against an Indianapolis defense that made Brock Osweiler look good last week. Flacco is a QB2 with upside for Week 16.

RUNNING BACKS
Stud: LeSean McCoy – McCoy has 20+ fantasy points in back-to-back games. He hasn’t done that since Week 7-8. The Patriots’ defense has been better, but McCoy should have another big week. He’s a top ten running back for Week 16.

Sleeper: Jay Ajayi – Ajayi hasn’t scored double-digit fantasy points since Week 11. That should change this week against the Raiders. Oakland is allowing the 13th most fantasy points to opposing running backs. Ajayi is a RB2 for Week 16.

WIDE RECEIVERS
Stud: Marvin Jones – Jones should have a big week against his former team. The Bengals are thin at cornerback. He is averaging 21.7 yards-per-reception in his last six games. He has 64 yards receiving or more over his last five games. Jones is a WR2 against the Bengals.

Dud: Stefon Diggs – Diggs has struggled in recent weeks. He did have a touchdown against the Bengals, but hasn’t topped 90 receiving yards since Week 4. The Packers are a decent matchup, but it’s hard to trust Diggs as anything more than a WR3 with your season on the line.

Sleeper: Devin Funchess – Funchess only had one reception last week. That should change against the worst defense in the league. Tampa Bay is allowing the most fantasy points to wide receivers this season. Funchess could top 100 yards receiving for the second time in 2017.

TIGHT END
Stud: Jimmy Graham – He’s struggled in recent weeks, but he still has nine touchdowns in his last 10 games. Dallas has been beaten by tight ends and I expect the Seahawks to score plenty of points. Graham is a TE1 against the Cowboys.

Dud: Greg Olsen – Tight end is the one position the Buccaneers have been able to guard. They haven’t allowed double-digit fantasy points to a tight end all season. Olsen had a big game last week, but he’s hard to trust in this one.

DEFENSE/SPECIAL TEAMS
Stud: Baltimore – The Ravens get a reeling Colts team at home. They’re my number one defense of the week. Indianapolis is allowing the second most fantasy points to opposing defenses this season.

Dud: Kansas City – The Chiefs look like a good play, but the Miami offense should perform this week. Kenyan Drake has dominated over the past three weeks. Avoid the Chiefs if you can.

Sleeper: Chicago – The Bears have a great matchup against the Browns this week. If you’re desperate for a defense, you could do worse than Chicago. 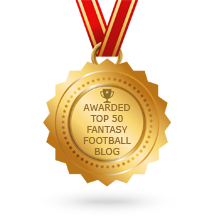