Wide receiver Antonio Brown made it clear he no longer wanted to be on the Steelers and his wish was granted. He was traded to the Raiders in an exchange for a third and fifth-round pick in next month’s NFL Draft.

There were many teams rumored to be interested, including the Bills. Brown reportedly nixed a trade to Buffalo on Friday.  If we would have landed in a Bills’ uniform it would have dealt a big blow to Brown’s fantasy upside. While Oakland is a better spot for him in that regard than Buffalo, the move still results in a downgrade.

It signifies the end of a rough patch for the Steelers’ front office, who sold their souls riding out the success of Brown and running back Le’Veon Bell while the two superstars became more focus on themselves than the team’s overall success.

The payday is what this move was really about for Brown. His total compensation for the next three years has increased from $38.925 million to $50.125 million, while his guaranteed money has gone from $0 to $30.125 million per ProFootballTalk.com.

As disgruntled as Brown may have become with Ben Roethlisberger, he is a much better quarterback than Derek Carr. Big Ben will be a first ballot Hall of Famer. Carr has been in the league five years and never finished above league average in YPA.

His first season under Jon Gruden produced mixed results for Carr. Losing Amari Cooper in a mid-season trade did not help matters. After showing glimpses of being a franchise cornerstone in 2015 and 2016, Carr has regressed over the past two seasons as he averaged just over 3,700 yards per year with a 7.07 YPA and 1.78 TD/interception ratio.

Brown has been arguably the top WR in each of the last four seasons in fantasy. It is hard to see a scenario where he will be in the top five players at the position drafted in 2019. His current ADP at FantasyFootballCalculator.com has him going at 2.06 as WR8 in 12-team PPR formats and that seems about right. 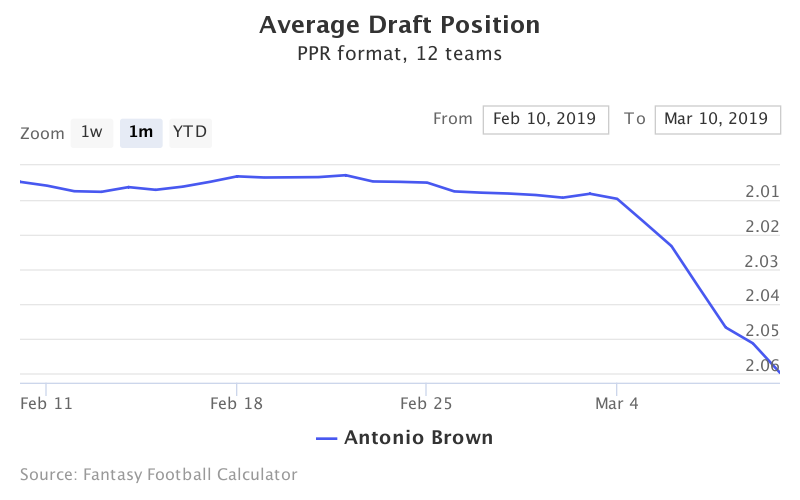 Here is my quick list of winners and losers in fantasy from this trade:

What Are The Odds Of The 49ers Getting A 6th Super Bowl Win?