I participated in the first official 2020 fantasy football mock draft on SiriusXM Fantasy Sports Radio on Tuesday, February 11. It is always a great way to start my off-season prep. There were definitely some interesting nuggets to consider. 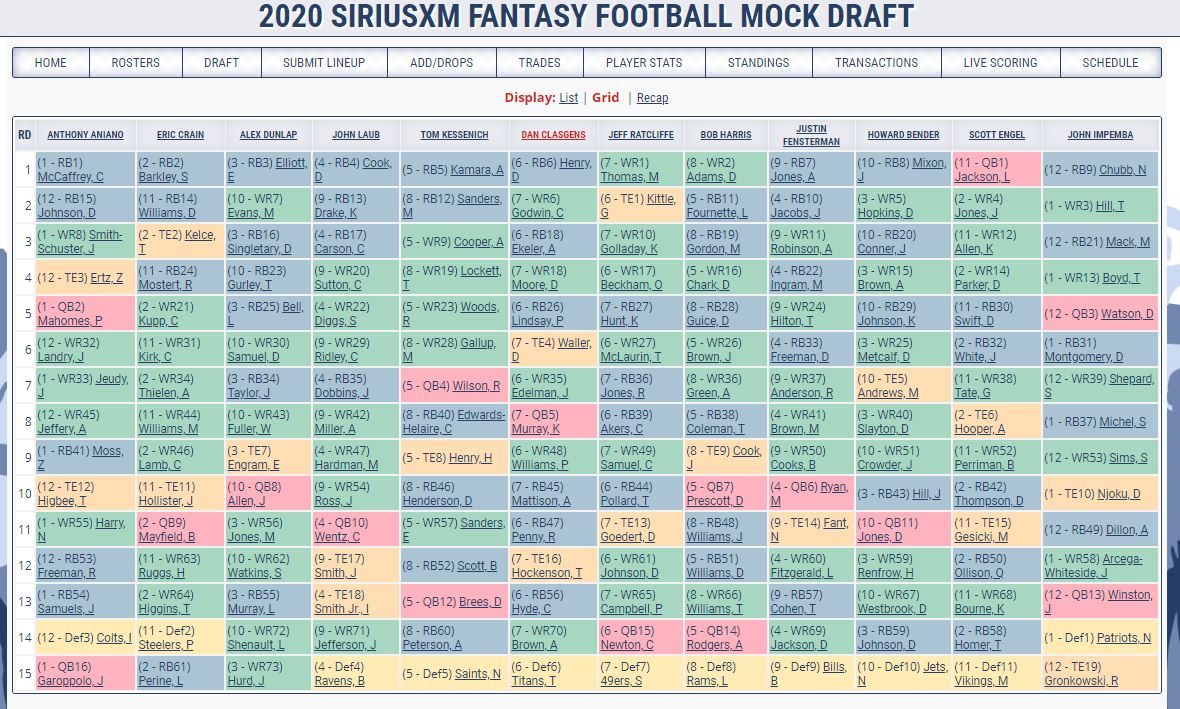 Loving on Lamar: I have a ton of respect for Scott Engel, but I was a bit shocked to see him grab Lamar Jackson at 1.11. Typically quarterbacks slide in these industry drafts, but this pick speaks to just how valuable some view Jackson to be. Regression is likely coming for Jackson, but he has the ability to be a 1,000-yard rusher and has shown 30+ TD potential throwing the ball. If he delivers another season anything close to 2019 the pick can be justified. Had Jackson still been on the board at pick 2.7 for me I would’ve given strong consideration.

Value at wide receiver: With so many running backs being gobbled up early on, there were plenty of viable starting options at wide receiver to fall to the mid-rounds of the draft. DK Metcalf, Terry McLaurin and Deebo Samuel all were available in Round 6 while some steady veterans like Adam Thielen, Julian Edelman and A.J. Green slid a round later.

Tackling tight end: One position that is growing deeper is the tight end position. The Big 3 remained the same as a year ago, but George Kittle went ahead of Travis Kelce in this draft and Zach Ertz was a distant third. Darren Waller and Mark Andrews are impact players that were able to be had in Rounds 6 and 7. Tyler Higbee somehow slipped to TE12 in Round 10. I like the front-end guys, but it is going to be hard for me to pay up to get them when I know what is left behind if I wait.

Rookie rants: While I wasn’t able to grab any of the rookies in this draft, that doesn’t mean there aren’t going to be some good ones available. Running back D’Andre Smith of Georgia was the first one to go as RB30 at pick 5.11. Wisconsin’s Jonathan Taylor (7.3/RB34) and J.K. Dobbins (7.4/RB35) of Ohio State went shortly thereafter.

WTF?: The one pick that should pop out on this board like a sore thumb was when Anthony Aniano grabbed David Johnson as the RB15 at pick 2.12. Given what we saw last year, the current news flow, the contract situation and the clear story most of the metrics are telling us there is no way he should be projected as a top 15 running back at this point. Even if you’re bullish on Johnson you can’t draft him this early given what the general consensus is around him in the fantasy community heading towards 2020. He could’ve had him several rounds later.

If this would’ve been a PPR, I would’ve been more tempted to take Michael Thomas over Henry. In this format, I favor the running back with all the touchdowns. Honestly, I’d prefer to pick more at that back end and take Joe Mixon or Nick Chubb and have an earlier Round 2 pick. However, I was ecstatic to see Godwin fall to me at 2.7. I’m projecting him there as if Jameis Winston were to return to Bucs. Ekeler was a top 10 producer in this format at RB last year and I expect Gordon to depart this offseason. Moore has QB questions of his own, but he is loaded with talent and projects as a backed WR1 for me heading into next season.

This is the part of the draft where leagues are often won or lost. I built some depth in my backfield with Phillip Lindsay (5.6) and a pair of younger runners in Alexander Mattison (10.7) and Rashaad Penny (11.6). Mattison is another Dalvin Cook injury away from top 15 potential. Penny suffered a major injury and has a long way back, but you can do worse as a RB5. I went in the front half in the league to grab players at quarterback and tight end, taking the fifth quarterback off the board in Murray and the fourth tight end with Waller. Both players have a chance to take another step forward in 2020 and offer high-impact potential. Edelman and Williams were both values to me where they fell based off of my early rankings.

My last few picks in any drafts are always darts. Looking for some high-risk, high-reward type of players here makes sense. If they flame out. You hit the waiver wire and move on. Hockenson’s injury slowed his growth, but he has the makings to be something special at the position and he could easily be a top 10 TE this year if things break right. I’m not a huge Hyde fan at this point of his career, but the Texans might be. Even if he gets a share of the touches in Houston in the season ahead that makes him a better option than RB56. I’m not a fan of Brown and there is a strong chance he never plays in the league again. Honestly, I was hoping DeSean Jackson would drop to me for this pick, but he we three picks earlier to Justin Fensterman so I pivoted to Brown. If he is someone how reinstated, teams will show interest as a WR70 what is there really to lose other than maybe my dignity for drafting a slime ball.