Within hours of the NFL Draft wrapping up I was invited to participate in the SiriusXM Fantasy Sports Radio Post-Draft Fantasy Draft against some of the brightest minds in the industry. I take a look back at some of my decisions and some trends I found interesting. 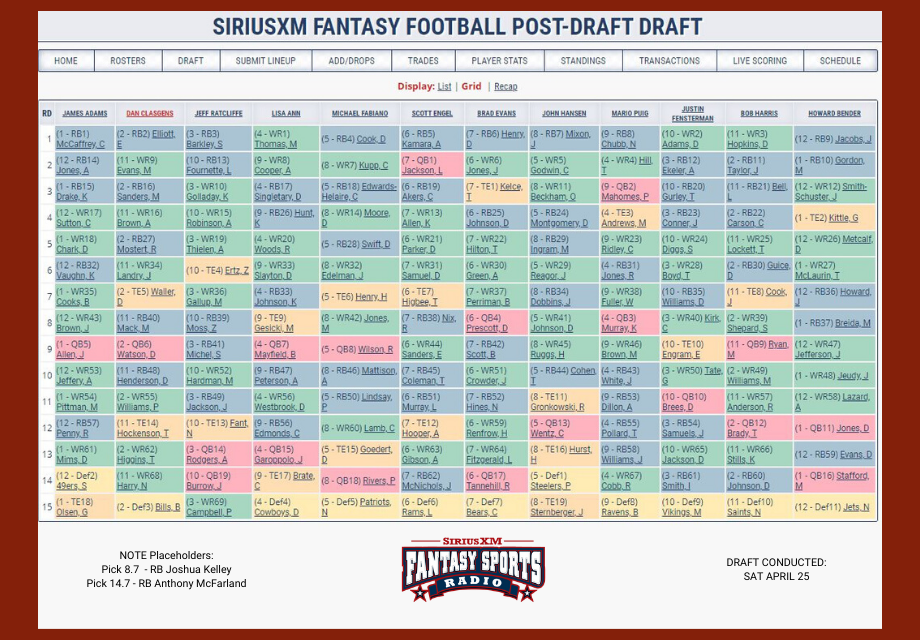 Picking in the No. 2 hole isn’t a bad spot to be in. I went Zeke over Saquan Barkley after the Cowboys’ offense added more players in the NFL Draft. In the end, I’d rather picked third and let whomever fall to me. I was ecstatic to see Mike Evans drop to me at 2.11, he shouldn’t have. Miles Sanders is underrated by many, but a stellar RB2 in any format. I was surprised to see him drop to Round 3. A.J. Brown came on late last year for Tennessee and finished strong. His 2.67 yards per route run was the highest mark since 2014. With Matt Breida getting dealt to Miami on draft weekend, I didn’t expect to see Raheem Mostert fall to RB27. He’s a nice back-end RB2 on my board.

Jarvis Landry isn’t sexy, but he is consistent. I like him better in PPR, but he’s a stellar WR3 in any format. Darren Waller saw some regression as the 2019 campaign went along after a fast start, but the guy is a freak and I believe big things are still ahead in an improving Raiders’ passing attack. I’m all in on Jonathan Taylor in Indy, but don’t’ expect Mack to go completely away. I’ll take him as RB40. I feel even stronger about landing Darrell Henderson at 10.11 (RB48). Industry drafts all see QB’s slide so that wasn’t a surprise. Watson is a mid-range QB1 on my board with a fair amount of upside even without DeAndre Hopkins. This is good value for him here.

Preston Williams has become one of my favorite double-digit round receivers. Miami is on the rise and Williams flashed in 2019 before suffering a season-ending injury. I’ll take him as my WR4 all day long. I’m not as high as some on T.J. Hockenson, but this was a fair price. I like him much more as a TE2. Plus if he does prove me wrong he becomes trade bait with Waller already in the fold. Tee Higgins and N’Keal Harry both possess nice upside, but could easily be non-producers in 2020. I like upside guys in those final spots. They either hit, or you hit the waiver wire. Finishing up with Bills’ D, one my top defenses on my board, was the icing on the cake of what I thought was a solid draft.